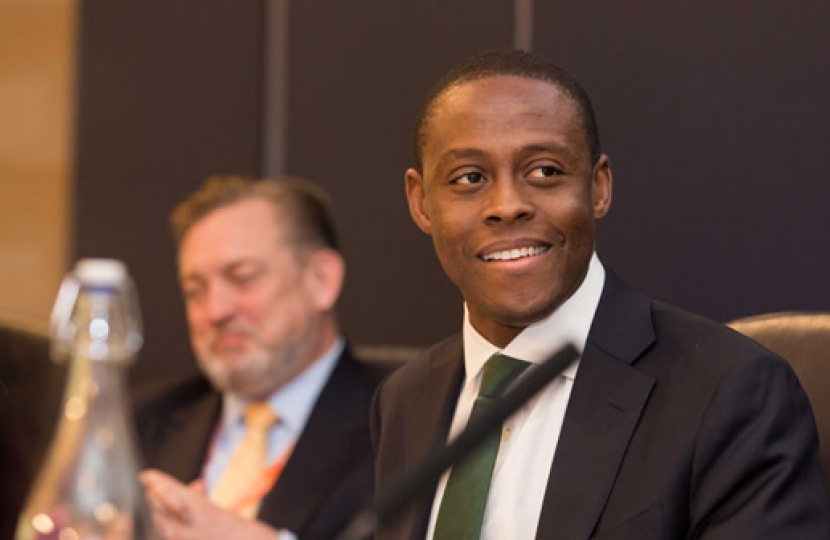 “I gave a speech to an audience of business leaders in the City about the importance of education to the economy, and how business can help with improving education at school, university and college, and in improving lifelong learning.”

Good Morning. My name is Bim Afolami, and I was elected as Conservative MP for Hitchin and Harpenden in June of this year, filling the shoes of Peter Lilley, Cabinet Minister under Thatcher and Major and MP for 34 years. Before that I spent ten years in the City, first as a corporate lawyer at Freshfields and Simpson Thacher and Bartlett, and then as a senior executive at HSBC. I recognise that almost none of you will know who I am, and are waiting for Nigel Farage, so I’ll try to be brief.

We could spend all day talking about Brexit. But, frankly, there is a need to think about what the British economy will look like after Brexit, for the next 10-15 years.   Brexit should be the start of a renewal of our economy and society, not the end in itself.

We’re set to leave the EU at a time when we’re one of the strongest economies in the world. But we are currently facing a challenge and an opportunity in the second industrial revolution: a fundamental reshaping of how our economy will work, in every area, through the automating of activities that are mostly, right now, done by human beings. I don’t believe that robots are going to take all of our jobs: it’s more complex than that. Since 1980 employment has been growing faster in occupations that use computers than those that don’t. Partial automation can increase demand by reducing costs: for example, despite the introduction of barcode scanners in shops, the number of cashiers has grown.

But though technology may not destroy jobs in aggregate, it will force change. Coding skills, for example, are now required well beyond the technology sector. In America in 2015, 49% of postings in the top quartile of best paying jobs asked for coding skills. However, despite this increasing need for new skills, employers seem to be moving in the opposite direction. From 1997 until 2009, the average amount of training received by workers almost halved. One reason for this is the much broader range of employment options to get the job done – in particular offshoring, and self-employed consultants (I know this from my time at HSBC). Organisations seem to have moved from creating talent to consuming work.

A university degree, or a technical qualification, does not answer the need for the continuous acquisition of new skills, especially as career spans are lengthening. For our country to remain economically competitive, Britain must completely revolutionise training and career-focused education throughout people’s working lives, as well as improving basic school age performance.

The one thing that unites your employees is not what they said when they applied – not “a long-standing interest in financial services” or “excellent team-work”, it’s that all of them went to school. In almost every country in the world, each generation is becoming better and better educated, with higher and higher basic standards. Not here. Not in England.

England is the only country in the developed world where the generation approaching retirement (between 55 and 65) is more literate and numerate than the youngest adults (between 16 and 24). This is despite record levels of education spending over the last 20 years. Something is not right, and this demands immediate attention.

The key thing about the 21st-century economy is that we don’t know what jobs will look like in ten years’ time, let alone twenty.

What do you need to be a successful participant in the modern rapidly changing economy? Firstly, you do need technical skills related to the specific knowledge and experience needed to carry out your role. But also, and perhaps more importantly, you need what might be termed “foundational skills” – skills that will apply more and more in our modern economy – creativity, problem-solving, empathy, and (crucially), the ability to learn new skills.

The ability to adapt is going to become increasingly important. The President of South Korea admitted recently that, though Korean children far outstrip their counterparts in any other country in mathematics, they are taught how to pass exams rather than how to problem-solve. The government is worried that this will hold their economy back when, in twenty years’ time, these children are driving the economy and trying to solve problems their teachers and exam papers couldn’t have imagined.

We shouldn’t try and be overly specialised or vocational too early in our lives, but there are some skills we must invest in more. We need to teach coding as a fundamental part of the curriculum, to ensure that advances in technology don’t just benefit those whose parents have the means to pay for coding classes outside school. And science, engineering and maths skills are in short supply in Britain compared with our leading competitors – the government is rightly pushing strongly on that.

Having a workforce better skilled and better placed to take advantages of the opportunities offered in the new economy will help business and our economy.

So what can you do?   business should matter more to education

In Britain, the Church plays a much greater role in the education of young people than business does. Business can and should play a more of a role. We need to make clear to you, the business community, the benefits that getting involved will bring and I want to get people who are interested in money interested in education.

This is not new thinking. In the late 19th century, investing in education was a leitmotif of enlightened capitalism. George Cadbury and Lord Leverhulme poured money into education, public libraries and museums in their new settlements. And the guild system ensured that businesses could maintain the highest of standards by providing vocational education.

The first and most obvious way of using business, would be for business to get involved in telling the government what skills it needs. In Singapore, there is a system whereby roughly every five years each industry spells out the changes that it expects to see in its industry in the next 3 – 5 years, and to identify the skills it will need. This, alongside a voucher given to every adult for them to spend on training opportunities with government-approved providers, helps Singaporeans navigate the changing economic landscape more effectively and with less fear. We should try this voucher here.   Business will benefit, as will the workforce, through increased opportunities and increased productivity.

Another way – Businesses can directly help with the teaching of new or enhanced skills in the classroom – perhaps coding skills or advanced STEM subjects, perhaps taught in a less theoretical and more vocational way.   Business can help supplement traditional teaching done by professional teachers. Local schools partnering with local businesses, to improve the quality of skills and teaching. Schoolchildren getting real world contact with businesses, not for a week manning the printer doing work experience, but in the classroom, engaging with real world problems and learning maths, engineering and science in a new way. This would broaden the experience and skillset of your workers, would strengthen your links with your local community, and allow you to develop relationships with capable sixth formers who you can recruit later in their careers.

Finally, we need to try and develop the culture of lifelong education if we are to succeed in this new age. If we could work out a scheme with the Treasury that would see the Government top up the new apprenticeship levy, this would mean that employers would be able to further develop the training of their workers. Not just entry level apprentices, but middle and senior level managerial jobs. The money could go straight into training beyond apprenticeship level, and ensure that companies have a workforce with the skills they most need, ready to stay ahead in this 21st-century industrial revolution.

I know that you are all acutely aware of the impact of the digital revolution in your businesses. What I have tried to do today is put those changes in a context of how we might revitalise and repower Britain after Brexit, to fundamentally shift how we think about education from a relatively short, one-off process, run by the state, at the beginning of our lives to being a constant, ongoing, exciting process of adaptation to rapid technological change, with business, government and people – the British people – working hand in hand. I know I am in a room full of financiers and businessmen – you know that the most important capital is human capital. If we get this right for the next generation, Britain will prosper because we will have a better-educated workforce, at all levels, with a much greater ability to benefit from modern technological change in the new 21st-century economy. Our businesses, and economies, will be more successful, more productive and more profitable. Let’s not miss this opportunity.