Why Skills matter and why we need a Revolution 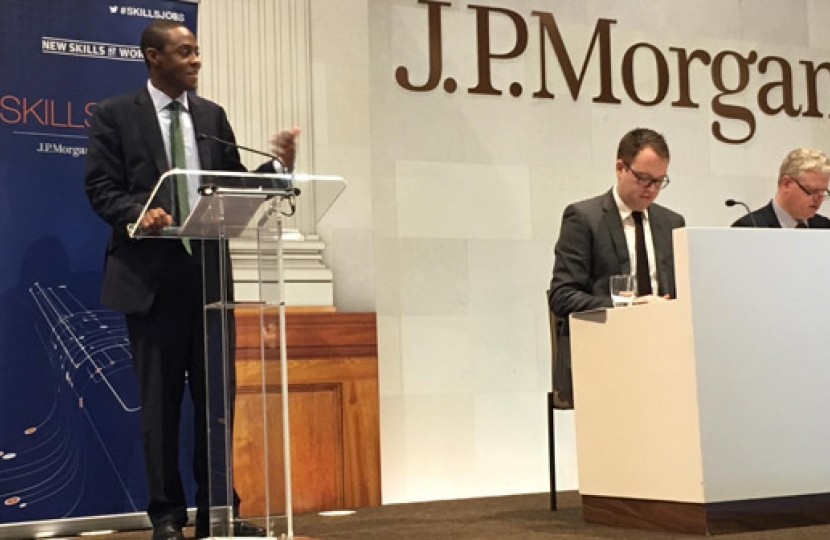 Good Morning. My name is Bim Afolami, and I was elected as Conservative MP for Hitchin and Harpenden in June of this year, filling the shoes of Peter Lilley, Cabinet Minister under Thatcher and Major and MP for 34 years. Before that I spent ten years in the City, first as a corporate lawyer at Freshfields and Simpson Thacher and Bartlett, and then as a senior executive at HSBC.

In short, I like this IPPR Report. I think it diagnoses the problems well, and I agree with most of it. I want to talk about two things in particular – lifelong learning and need to dramatically improve the number and quality of British STEM graduates. But first of all, I want to set the context for the economy we are in, and what that means for skills and for our education system.

We’re set to leave the EU at a time when we’re one of the strongest economies in the world. But as the economy looks to be a bit sluggish, and faced with temporary Brexit uncertainty, the weaknesses in our economy are being more exposed than in recent years. In addition, we are currently facing a challenge and an opportunity in the second industrial revolution: a fundamental reshaping of how our economy will work, in every area, through the automating of activities that are mostly, right now, done by human beings. I don’t believe that robots are going to take all of our jobs: it’s more complex than that. Since 1980 employment has been growing faster in occupations that use computers than those that don’t.   Partial automation can increase demand by reducing costs: for example, despite the introduction of barcode scanners in shops, the number of cashiers has grown.

But though technology may not destroy jobs in aggregate, it will force change. For example, coding skills are now required well beyond the technology sector. In America in 2015, 49% of postings in the top quartile of best paying jobs asked for coding skills. However, despite this increasing need for new skills, employers seem to be moving in the opposite direction. From 1997 until 2009, the average amount of training received by workers almost halved. One reason for this is the much broader range of employment options to get the job done – in particular offshoring, and self-employed consultants (I know this from my time at HSBC). There are other reasons too. But overall organisations seem to have moved from creating talent to consuming work. We need to try and address this – both for the health of our economy and for the individual life chances of each individual.

A university degree, or a technical qualification, does not answer the need for the continuous acquisition of new skills, especially as career spans are lengthening. For our country to remain economically competitive, Britain must completely revolutionise training and career-focused education throughout people’s working lives.

So – back to this report, and I want to address two things in particular – lifelong learning and the need for more and better STEM graduates.

I am a Conservative because I believe in opportunity and aspiration – the ability of people like my father who came to this country as a young doctor from Nigeria – to make the most of their God given talents and reap the rewards in a free and dynamic economy. We still reflexively think of education as being something that you do as a child, and then in a more specialised way at university or college, and then that’s it. You’re ready. For the rest of your career you shouldn’t need to take any exams or qualifications. Those days are gone. All of us – and I have had already had three jobs (a corporate lawyer, a banker and a politician) – will need to continually re-train throughout our lives. In this area, there can be a positive role played by a limited in size but active and strategic in scope government in helping people take control of their own lives and get the necessary training and re-training that they need.

This IPPR report calls for advanced learner loans which could tie repayment to employment in certain key shortage occupations (in a similar concept to tuition fees). I support this – but I would go further. The government should provide every adult with a voucher, call it a personal learning account, which would enable them to buy training or re-training services from government approved providers all over the country. This could be topped up by individuals themselves, or their employers, both of whom would get a tax break for doing so – in a similar way to providing tax relief on pension contributions. How would the government pay for this? Ruthlessly de-fund the bottom 25% of university degrees – the courses which have been evidentially proven not to provide value for money in terms of career progression or earnings, and use the government funds in support of individual learning accounts and improved vocational education for school leavers.

Now it is dangerous to predict even a year into the future, but examining medium and long term trends can give us an idea of what we might expect. The high-quality jobs that seem to be created in this new economy are increasingly jobs that require STEM degrees and skills. As a country we aren’t doing nearly enough to produce British graduates in these subjects, and the problem then compounds itself because we then can’t find enough teachers to teach children in our schools – partly thorough the lack of graduates and partly because the STEM teachers we do have are so highly prized by business that they get snapped up for high salaries and they leave the profession.

Now I support this report’s call for expanding the bursaries which are conditional upon teaching STEM subjects after graduation.   But let’s also be bolder and more innovative way. What’s the problem? Our problem is not just numbers of teachers – it is the enthusiasm and passion that young people feel for STEM subjects, to encourage them to pursue them to higher levels.

We need to fundamentally shift how we think about education and skills from a relatively short, one-off process, run by the state, at the beginning of our lives to being a constant, ongoing, exciting process of adaptation to rapid technological change, with business, government and people – the British people – working hand in hand. Look, when I was in the City, we spent a lot of time talking about allocation of capital.   But we all know that the most important capital is human capital. If we get this right for the next generation, Britain will prosper because we will have a better-educated workforce, at all levels, with a much greater ability to benefit from modern technological change in the new 21st-century economy. The recommendations in this report should be considered and brought forward by government. Let’s not miss this opportunity.